The following is a translation of Shaykh Usama’s speech. It has been translated by NEFA Foundation. A brother has checked it to verify its translation, and it appears correct. This speech of his is really astonishing. This isn’t his typical speech where he’s quoting Qur’an and ahadeeth; this is more personal, to the American people. It shows how deep his knowledge is of American politics and the rifts within it. His speech should be spread wide and far so that the American people can see the reality and make the intelligent decision to read the books he recommended.

Statement to the American People

May Allah lend him His support

A publication of as-Sahab Media Production

Praise Allah who created the creatures to worship Him, ordered them to be fair, and permitted the oppressed to exact just and equal punishment from the oppressor.

O American people: my message to you is to remind you of the reasons for the attacks of 11 September, the wars and threats that ensued, and the way to eliminate them from their roots. I would like to single out the families of those who were hurt by the attacks and who recently demanded the launch of an investigation to uncover the reasons for the attacks. That constitutes an important first step in the right direction out of many steps that purposely led you down the wrong path for the eight lean years you just went through.

It would behoove the entire American population to join them because your delay in knowing those reasons has cost you dearly with no return on investment to speak of. If the White House administration, one of the parties to this conflict, has convinced you over the past few years that this war is necessary for your security, remember that wise people insist on hearing both sides of the argument to arrive at the truth. So, lend me your ears.

Let me begin by saying: We have on multiple occasions proven and declared, for over two decades now, that the reason for our dispute stems from your support of your Israeli allies who occupy our land, Palestine. This position of yours along with a few other injustices is what propelled us to carry out the attacks of 11 September. If you were to know the injustices we endure at the hands of the Jews with support from your administration you would come to realize that both our nations are victims of the politics of the White House, which is in reality the hostage of special interest groups, especially large corporations and the Israeli lobby.The best person to explain the reasons for 11 September to you is one of your own citizens, the former veteran CIA agent whose conscience awoke as an octogenarian. He decided to tell the truth despite all the threats against him and to explain to you the message of 11 September. So he did a few things for that purpose, one of which was to write his book: Apology of a Hired Assassin.

As for explaining the suffering of our people in Palestine, Obama admitted recently in his speech in Cairo how our people suffer over there from an occupation and a siege. The matter becomes clearer if you were to read what your former president Carter wrote about the racism the Israelis have for our people in Palestine, and if you had likewise listened to his speech a few weeks ago when he visited Gaza, under siege and in ruins, when he said: “The people of Gaza are being treated more like animals than like human beings.” Allah’s help is all sufficient. He is the Best Protector.

Here, we should take a long pause, for whosoever possesses an atom’s worth of mercy would have to sympathize with those oppressed elders, women, and children who are under this murderous siege. On top of that, the Zionists pour American-made incendiary white phosphorous bombs on them making their lives an endless tragedy–to the point that children are dying in the arms of their fathers and doctors due to shortages of food and medicines, and no electricity. It is truly a mark of shame on the faces of world leaders and their followers who are accepting of that, with the foreknowledge, insistence, and influence of the Israeli lobby in America. The details of all that are explained by two of your citizens, John Mearsheimer and Stephen Walt in their book “The Israel Lobby” in the United States.” After reading the suggested books you shall become aware of the truth and be greatly shocked by how much you have been misled. You will also come to know that those who make declarations form the White House today, claiming that your wars against us are necessary for your security, are implementing the Cheney-Bush plan and are peddling old fear politics for the benefit of large corporations who operate at the expense of your blood and economy. Those are the ones who are forcing these wars upon you, not the Mujahidin. We are but defending our right to liberate our land. 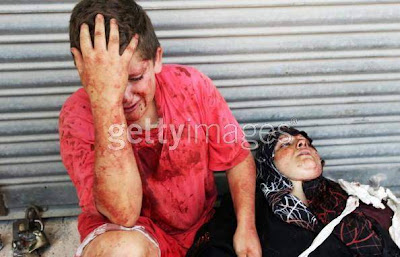 And if you were to do well for yourselves you would recognize that the White House has been taken over by special interest groups; and efforts to liberate it would have been better than fighting to liberate Iraq as Bush claimed. In such circumstances, the leader of the White House, regardless of his name, appears to be a train engineer taking a train he does not own down the tracks that had been laid by those special interest groups, lest he derail it and begin fearing a fate like the one met by former president Kennedy and his brother.

In summary: It is high time for you to liberate yourselves from the ideology of fear and terror that has been laid upon you by the neo-conservatives and the Israeli lobby, and table your alliance with Israel for discussion, and ask yourselves when determining your position: are your security, blood, sons, treasure, jobs, homes, economy, and reputation more valuable? Or the security of Israel, its sons, and its economy? If you were to choose your security and to put an end to the wars—and that’s what opinion polls have shown [to be the majority choice]—that would require that you work on your end at tying the hands of those who mess with our security. We are ready to be responsive to such a choice, based on aforementioned sound and just foundations.

Here is an important point that demands attention regarding the war and ending it. When Bush took power and appointed a Secretary of Defense that had a big hand in the killing of two million oppressed villagers in Vietnam, wise people predicted that day that Bush was getting ready for new massacres during his tenure; and that’s what’s happening in Iraq and Afghanistan. Then when Obama took over and left Bush and Cheney’s men in the top positions of the Department of Defense, such as Gates, Mullen, and Petraeus, the wise realized that Obama is a weak man and would not be able to stop the war as he promised. Instead he will delay it as long as possible. If he had been serious enough he would have entrusted the leadership posts to those opposed to the fruitless war such as the former commander in Iraq, General Sanchez, and the Centcom chief that Bush forced to resign shortly before leaving the White House because of his opposition to the war, and appointed a successor that would escalate it.

Then Obama, under the guise of working together with the Republicans, pulled a great trick on you by keeping the most important and dangerous Secretary, a Cheney man, to keep on with the war. You shall come to realize in time that you have changed nothing in the White House except for the faces. The bitter truth is that the neo-conservatives are still casting a heavy shadow upon you.

And here we come full circle: if you were to stop the war, then so be it. If not, then the only way forward for us is to keep waging a war of attrition against you on all possible fronts as we did with the Soviet Union for ten years until it fell apart by the grace of Allah and was reduced to an artifact of history. So stretch this war as long as you’d like for you are fighting a hopeless and losing war that has no end in sight for the sake of someone else.

The Russian generals who once fought in Afghanistan have warned you of the outcome of the war before you started it. But you do not like people who give advice. A war that is financed by money borrowed with monstrous usurious loans and whose soldiers’ morale is in such ruins that they commit suicide daily is a losing war, if Allah the Exalted permits.

This war was prescribed to you by doctors Bush and Cheney as medicine for the events of 11 September and it has been a bitter and losing war, more bitter than the events themselves for its structured loans have almost ruined the economy of all of America. As it has been said: Disease is sometimes easier than the cure.

And we, by the grace of Allah the Exalted, carry our weapons on our shoulders and have been fighting both poles of evil in the East and the West for thirty years now. A single case of suicide has yet to be recorded on our side despite the international persecution against us. We praise Allah the Benefactor for that. This should tell you that our ideology is sound, our cause just, and that with Allah’s permission we shall continue along our path to liberate our land. Our weapon is patience, and from Allah we derive our victory. We will not give up the Aqsa for we hold Palestine more dearly than we do our souls.

So prolong the war as much as you like, for we swear by Allah that we will never negotiate over Palestine.

Fierce war will not get me

For I am no longer tender, young

For this is why my mother begot me