Danish cartoonists are proven to be defiant against Allah & His Messenger 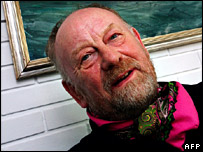 “We are doing this to document what is at stake in this case, and to unambiguously back and support the freedom of speech that we as a newspaper will always defend,” Berlingske Tidende said.

They are doing it to “defend” their Shirki man-made laws of “freedom of speech.”

The cartoon was also broadcast on national television, and even newspapers that were originally against the publication of the caricatures are now backing the campaign to defend freedom of speech, the BBC’s Thomas Buch-Andersen in Copenhagen says.

And so the other Kuffaar who were originally against it, have now joined the caravan of fighting Allah and His Messenger, sallallahu ‘alayhi wassallam.

Here is a picture of one of these cartoonists:

This Kaafir (may Allah’s curse be upon him) said,

“Of course I fear for my life when the police intelligence service say that some people have concrete plans to kill me.”

Keep fearing for your life you white trash.

Anyone who wages war against Allah and His Messenger defiantly and arrogantly, will inevitably face the banner of Laa Ilaaha Illallaah: they will face those who will show them no mercy. “Humble with the believers, harsh against the Disbelievers.”

We wish we were able to express our extreme anger… and Walahi, our blood is boiling and our veins are shaking and our muscles are tightening…

All we can say to the cartoonists is: you fools seem to forget the end of Theo Van Gogh (may Allah’s curse be upon him) and forget to realize that even many of the Danish citizens who are Muslims will not tolerate it because they know the story of Ka’b bin Al-Ashraf and what the Companions of Prophet Muhammad (sallallahu ‘alayhi wassallam) did to him and they know that their Religion allows such a thing.

The more these cartoonists act in defiance of Allah and His Messenger, the more they attract a culture of Mujaahideen. Bush didn’t seem to learn from that nor do these low-life cartoonists. So keep showing your chest O Enemies of Allah! You are helping the process of waking up our nation as violent lions who tear apart their enemies with their bare hands.